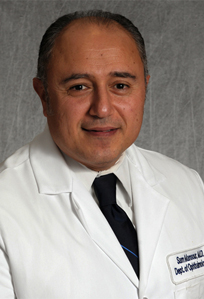 As Medical Director of the Virginia Retina Center, Dr. Sam Mansour has both extensive experience and expertise in the management of patients with vitreoretinal disorders. He received both his M.D. and M.Sc. (Neuroscience) degrees from McMaster University in Ontario, Canada. During that time, he was awarded two competitive and prestigious scholarships: The Ontario Graduate Scholarship and the McMaster University Scholarship, 1982 – 1984. Thereafter, he completed an internship in comprehensive medicine at the University of Western Ontario. Later Dr. Mansour went on to complete his residency in ophthalmology at the University of Toronto.

In 1991, Dr. Mansour was awarded the E.A. Baker Fellowship (1991- 1992). He then came to the United States to complete his fellowship in vitreoretinal and laser eye surgery. This was completed at the California Pacific Medical Center in San Francisco under the direction of the world-renowned vitreoretinal surgeon, Dr. Everett Ai.

In addition to many publications and presentations, Dr. Mansour continues to be an actively involved instructor for the George Washington University medical students and ophthalmology residents. Since the completion of his fellowship to the present time, he has been an instructor at several American Academy of Ophthalmology courses.